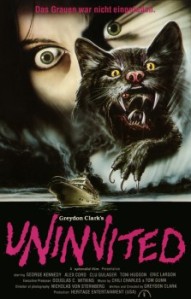 If you’ve ever experienced a panic attack while watching Sheri Lewis and Lambchop, or if “Sifl & Olly” make you break out in a cold sweat, or if you’ve ever had recurring nightmares about Kermit the Frog, you may want to stay away from “Uninvited.” Likewise, if cat videos on the Internet make you tense, or if Garfield makes you edgy, or if you can’t stop screaming whenever you see a can of Fancy Feast, you are strongly advised to avoid “Uninvited.” This is because the monster in this direct-to-video monster movie is represented half the time by a perfectly ordinary housecat and the other half by a mangy hand puppet. Those of us who aren’t terrified by such things, however, still have plenty of reasons to avoid it.

“Uninvited” is a movie that doesn’t need to be reviewed so much as interrogated. How did anyone believe anyone would find this scary? Who thought it was a good idea to make the monster so strange? What in the heck is going on with Clu Gulager’s teeth? These are mysteries that are fated to remain unsolved, unfortunately, and without them to hold your interest there’s almost nothing left of “Uninvited” to recommend it. Although the movie features one of the single most ridiculous monsters in horror history, that isn’t enough to pull it out of direct-to-video purgatory.

The movie starts in an unidentified laboratory, where researchers have identified a strange growth in one of its test animals, a floofy-looking cat. They’re about to cut it open and find out what’s what when the critter breaks loose, triggering a lockdown of the entire facility and a goon squad in hazmat suits chases after it. They corner the kitty in a stairwell but immediately we realize why this thing is so dangerous – it has a smaller, cat-like monster that climbs out of its mouth and shreds the throat of the closest living thing. Imagine Mr. Hyde was a doll-sized brute that jumped out of Dr. Jekyll’s mouth and they’re both cats, and that’s basically what we’re dealing with here. 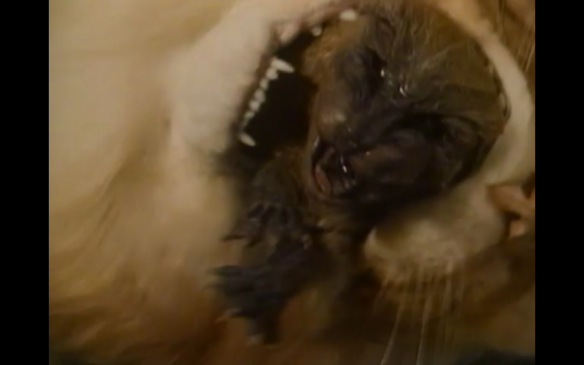 So, for the rest of the movie, you have this completely normal cat just hanging around and doing cat stuff, but all the characters have to act like they’re terrified of it because it might jump-cut to the grimy puppet-monster rubbing fake blood all over their necks. It doesn’t help any in the fear department that the soundtrack is over-dubbed with constant meowing, because otherwise the cat is just sitting there and they have to make it seem as if the cat is about to do something. When the little mutant cat does make an appearance, it’s very obviously attached to the arm of someone standing off-camera who is violently rubbing it against the actor’s neck. Only at the very end do we get to see the cat-monster outside of that context, and its resemblance to Toonces the Driving Cat is unavoidable.

Monster movies usually feature a scene where the monster is explained, sometimes to a tedious degree. This is where it came from, this is what it wants, and we can only kill it with baking soda, etc. “Uninvited” gets all of that out of the way with a line about how “they do all kinds of things to animals in those labs.” For once, I’d like to know more. What did they do to that cat? Was the little monster-cat that lives in its mouth the anticipated result? If so, what are the practical applications for something like that? Who was asking for cats with little monsters living in their mouths?

It’s easy to find yourself asking these questions because the human portion of the movie is so weak. As the cat murders its way down to Florida, college girls Bobbie and Suzanne are looking for a place to stay for Spring Break. They run into millionaire Walter Graham, who invites them to join him on his yacht the next morning. That doesn’t sit well with Walter’s partners, played by George Kennedy and Clu Gulager. They’re in a hurry to get down to the Grand Caymans to withdraw a lot of money before the SEC finds out how they earned it. There’s a fourth partner who they think is going to turn state’s evidence, so Clu drowns him in a hot tub. You know you’re a lousy criminal enterprise when Clu Gulager is your muscle. 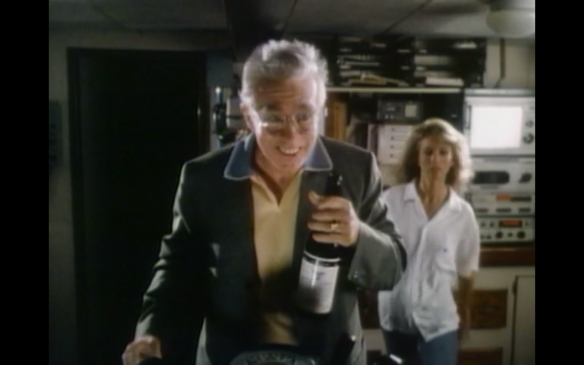 The girls run into college dudes Corey, Lance and Martin, and I say “run into” them because it’s not really clear whether or not they already know each other. The girls invite the three guys to come with them on Walter’s yacht, and Corey (played by eventual TV staple Rob Estes) is thrilled about the chance to meet “Wall Street Walter” himself. Corey is basically Alex P. Keaton as a date rapist, Martin is the smart, sensitive one, and Lance is the hard-partying jock. Before the boys and girls get on board the yacht, they happen across our killer cat and decide to bring him along. A cat on a boat is good luck, according to Lance.

Once everyone’s onboard, it’s only a matter of time before the mutant cat starts claiming victims. Clu is the first to get it as he drunkenly steers the boat, but it’s only because he spits booze in the cat’s face that he gets it at all. Without Clu’s steady hand on the wheel, the boat is now hopelessly adrift and tempers begin to flare. George Kennedy gets fed up with all the sexy teens being sexy while he’s just trying to commit some federal crimes, dammit, but he has bigger things to worry about after the cat chews through his hamstring and he starts convulsing due to the deadly toxin the mutant cat is carrying. Everyone panics except for Martin, who bonds with the yacht’s only crew member, Rachel, who has a backstory about Walter and her father that doesn’t really matter at all. 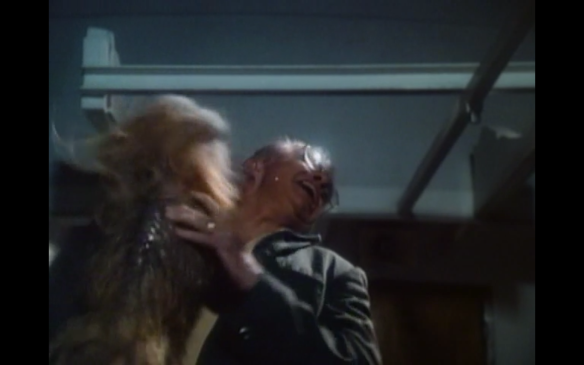 The stand-out moment of “Uninvited” comes late in the film, just after Lance is shot in the arm by George Kennedy and retires to his stateroom to recuperate. He’s visited by one of the girls, who offers him some sexual healing. Lance’s right arm has gone completely numb, which seems like something to be concerned about but simply amuses them. They start going at it, but when she looks down to check on his injury, she sees the mutant cat just gnawing on Lance’s hand under the sheets. A couple of Lance’s fingers fall off, and he freaks out about being infected. In his panicked state, Lance leaps off the boat and pulls his would-be lover overboard with him.

By the time Martin and Rachel end up on a lifeboat bobbing on the stormy seas with the killer cat puppet paddling after them, “Uninvited” has finally crossed the line to full camp, but it’s a case of too little, too late. Seeing the cat puppet leap out of the water to claw at Martin’s face not once but twice provides genuine laughs in a movie that could have been full of them. Only Gulager, with his fake horse teeth and drunken horseplay, gives a performance worthy of his surroundings. With a few tweaks and more scenes like Lance’s untimely demise, “Uninvited” could have been a campy cult favorite in the vein of “Return of the Living Dead” or “Re-Animator.” As it exists, however, you’ll need a serious sock-puppet phobia to derive any emotions out of this movie.