Earlier this year, there was a minor outrage directed at a dopey-looking dog movie because someone leaked a video that made it look like a dog was pushed into a water tank against his will to make it look like he was swimming. That bit of behind-the-scenes mistreatment is nothing compared to “Wild Beasts,” where what was filmed is often so appalling and cruel that you shudder to think what was going on when the cameras weren’t rolling. “Wild Beasts” is the first horror movie I’ve seen where what happens in the movie isn’t nearly as stomach-churning as thinking about how they must have gotten it on film. “Wild Beasts” is an Italian production shot in Germany, and my theory is they did this because the producers figured that by the time the authorities figured out whose jurisdiction it was under, they would have the movie in the can.

At its core, “Wild Beasts” is basically a standard Italian zombie movie, but unlike “Nightmare City,” “Hell of the Living Dead,” or any number of Romero-inspired gut-munchers, this movie replaces the walking dead with live animals. After a city’s water supply is tainted with street drugs, the inhabitants of the municipal zoo become bloodthirsty monsters that break free of their cages and go on a rampage. People are mauled, trampled, torn to pieces and eaten alive by a veritable Noah’s Ark of crazed animals. Seemingly every attempt was made to feature as many shots of live animals in the action as possible, even if it meant killing a few. The director, Franco Prosperi, gained notoriety in the 60s and 70s with “Mondo Cane” and its follow-ups – “shockumentaries” that fixated on scenes of torture and animal cruelty. In this movie, he brings the savagery of the animal kingdom out of the context of documentary and uses it as a cheap substitute for special effects. 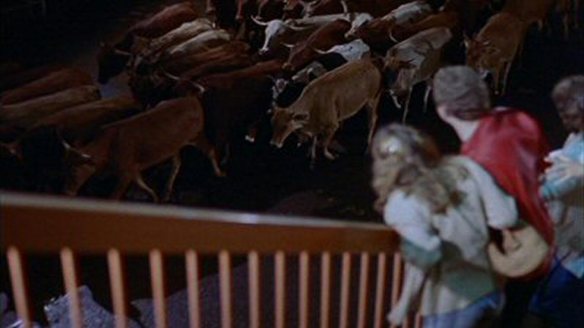 The mood in “Wild Beasts” is established right away, is we’re treated to a close up of a dead horse’s head being split open and served to the lions and tigers at the zoo during feeding time. From there, actors wrestle with live animals, elephants wrap their trunks around actors’ throats, and dozens of live rats are burned alive with a flamethrower.

There was another way to make this movie – take a shot from a nature documentary of a cougar, another shot of an actor being swiped at by a fake cougar claw and cut back and forth between those two shots fast enough that no one notices they’re not actually anywhere near each other. “Wild Beasts” does use a few puppets and rapid-fire editing in places, but it’s the exception rather than the rule. Prosperi displayed an almost pathological dedication to having live animals rampaging through the sets whenever they could.

As despicable as this particular form of cinema verite may be, it does produce some images you’re unlikely to see matched in any other animals-on-a-rampage movie. Elephants smash their way through barbed wire fences and stampede across an airport tarmac. A tiger stalks a man in a crowded subway car. And, in what might be the movie’s most memorable sequence, a woman tries to outrun a cheetah in a VW Beetle before T-boning another car and exploding. These are things you wouldn’t see in a movie that played it safer, and that makes “Wild Beasts” really unique and compelling in a sick kind of way.

On the other hand, “Wild Beasts” also is a movie that shows you horses being forced through plate glass windows and pigs trapped in corrals being eaten alive by hyenas. Yes, nature can be cruel, but it doesn’t need any help from Prosperi and his crew.

For the movie’s sake, it’s a good thing “Wild Beasts” features such reckless and audacious filmmaking, because there’s very little in the way of plot or characterization holding it together. The movie’s heroes – including a zookeeper who looks like John Oates and whose shirt appears to be held open by tape to expose a consistent amount of chest hair – move from animal attack to animal attack but can’t do anything to solve the epidemic. The best they can do is ride it out until the angel dust wears off, which eventually happens until the final twist starts a new chain of murderous events. Just about every scene in which the heroes try to understand what happened turns out to be completely unnecessary. 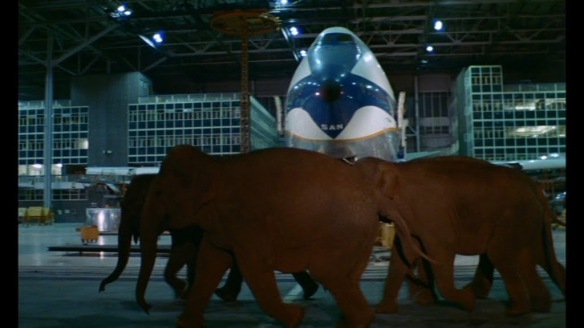 Speaking of unnecessary, there’s the matter of the heroine Laura and her daughter Suzie, who don’t share a scene together until the very end of the movie. I don’t consider myself an expert in Italian trash cinema by any stretch of the imagination, but what I have seen tends to feature a lot of weirdly precocious kids. Suzie is the ultimate latchkey kid, seemingly left on her own in her apartment for the entire day while her mom is out working at all hours of the day and night. And, as if the producers were concerned filming a bunch of animals being eaten and burned to death wasn’t sleazy enough, the prepubescent Suzie is introduced flouncing around on her bed practically topless. It’s hard to beat purposefully torturing and killing animals as the scuzziest thing about a movie. Prosperi not only attempts it, but also comes very close to accomplishing it.

There’s no doubt that “Wild Beasts” is a unique movie experience, but whether or not it’s a worthwhile movie experience is up to the individual. At the risk of sounding overly sensitive, watching animals being killed and injured solely for the purpose of making a movie just doesn’t do anything for me, and I’m glad few other films have followed in Prosperi’s footsteps.