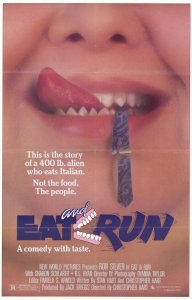 I didn’t realize “Eat and Run” had made any kind of impression on me at all until I saw the picture of its main monster on the VHS box recently. Years ago, when I was a kid and a voracious reader of movie reviews in the newspaper, certain movies just stuck with me because the critics’ plot descriptions made them memorable. That’s why it would be years before I ever worked up the courage to watch “Nightmare on Elm Street 2: Freddy’s Revenge,” thanks to Gene Siskel’s description of Freddy tearing his way out of the main character’s chest.

The review for “Eat and Run” came complete with a picture of Murray, the movie’s alien maneater. Murray was fatter than any human being I had ever seen in my life up to that point, so much so that I assumed he was some kind of Jim Henson puppet, and his bald head and shark-like mouth made me imagine a movie in which this mountain of flesh and teeth would be tearing people into bloody ribbons. It terrified me for days. So when I found the movie this week, the plot sounded familiar, but the sight of that creature on the box made it official. I had to see this movie at last.

Looking back on it now, I guess my cinematic Spider-Sense should have been tingling long before I pressed “play.” The IMDB reviews painted a very fuzzy picture, full of half-memories along the lines of, “Oh wow, I saw this movie on TV a few times when I was a kid! I think it was okay! 9/10!” Factor in that the movie apparently has been trapped in VHS purgatory in the United States since the late 80s and it’s not looking good that this is some kind of forgotten gem just waiting to be rediscovered.

“Eat and Run” is the story of a massive alien who crashes to Earth looking like Tor Johnson wearing Herb Tarlek’s wardrobe. The first Earthling he meets is an old Italian man, who he devours whole. From that point on, the alien develops a taste for Italian people and begins eating dozens of them across New York City. Hot on his trail is a dopey NYPD detective played by the late Ron Silver of “Timecop.” Silver’s detective has to lure the alien out of hiding and convince the criminal justice system to take it seriously.

But if you were going to watch “Eat and Run” expecting a “cop vs. alien” game of cat-and-mouse along the lines of “I Come In Peace” or “The Hidden” or “Predator 2,” that’s not what this is. “Eat and Run” is not really a movie about an alien eating its way through the Italian-American population of New York City. No, shockingly, the alien monster is really more of a jumping-off point for an extended series of running gags, none of which need a man-eating alien to be funny. (Or unfunny, for that matter.) These running gags include:

It’s not exactly a rare thing for a horror-comedy from the 80s to feature a lot of dumb jokes, but it is unusual for a horror-comedy from the 80s to offer nothing but dumb jokes. The fact that the alien in “Eat and Run” is eating people alive is practically incidental to the rest of the movie. Everything happens off-camera, and the only indication that the alien has eaten his victims is his habit of spitting out their shirt buttons. There is no blood, no special effects of any kind really. It was hard for me to imagine a movie could be outclassed in every respect by “Bloodsucking Pharaohs in Pittsburgh,” but here it is.

If for no other reason, I’m glad I finally saw “Eat and Run” to exorcise the image of that hulking bald guy with the shark teeth from my brain. At least I’ve eliminated the possibility that my childhood anxiety from that image will be forever lurking in my subconscious. Now all of my dread and loathing are focused on herpes jokes, where they belong.