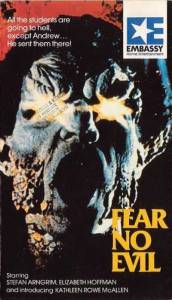 “The Exorcist” was one of the most shocking movies ever made at the time of its release, but as transgressive as it was, there were lines even it did not dare to cross. For example, you never got to see Satan’s wang. But where Friedkin dared not tread, Frank LaLoggia and “Fear No Evil” boldly stake their claim. “Fear No Evil” is a movie that not only is brave enough to combine supernatural horror with some elements of “Grease,” but also is unafraid to depict Lucifer’s junk on screen for the world to see at last.

But before the reveal of the Schlong of Satan, “Fear No Evil” is the story of Andrew, a quiet high school senior who is unaware that he’s the reincarnation of the Devil. Years earlier, Lucifer took human form but was killed by an elderly priest before he could exact his revenge on God’s domain. That priest in reality was the reincarnation of an archangel, and his sister is trying to track down their reincarnated archangel sibling so they will be strong enough to find and kill Andrew/Lucifer before he can conquer the world. As it turns out, Andrew’s classmate Julie just so happens to be the missing archangel.

A big chunk of the running time in “Fear No Evil” is given over to the mythology of these archangels, but it never really amounts to a whole lot. Julie is barely a character in the movie, and she only gets enough screen time to establish that she’s one of Andrew’s classmates and she’s also a missing archangel who can kill him. She doesn’t do anything on her own to further the plot, only reacts as people who know more about what’s going on push her into doing things.

In reality, this movie is all about Andrew, the reticent Devil-to-be. That’s fine, because “Fear No Evil” is at its campy best when it focuses on Andrew. Does Andrew’s baptism end with the baptismal font exploding in a geyser of blood? Does Andrew use his hell-born Satan powers to crush a gym class bully with a fatal dodgeball assault? Does he lure a friendly dog into a shed so he can kill it and drink its blood? Yes, yes, and oh boy you’d better believe it.

Nevertheless, “Fear No Evil” is kind of inconsistent when it comes to exactly how evil Andrew is, despite the chugging-dog-blood thing. There are times when his father complains that Andrew is purposefully driving a wedge between him and Andrew’s mother. On the other hand, Andrew seems like he really doesn’t want to be squeezing a dead dog like he’s trying to get juice out of a grapefruit. There are scenes where he’s quietly planning for college, and others where he’s flouncing around in diaphanous black robes and screaming about claiming the throne of heaven. It feels like they couldn’t decide whether they wanted the movie to be more like “Carrie” or more like “The Omen” and they decided to just try to be like both.

The only area in which “Fear No Evil” succeeds as anything other than camp is when it tries hardest to be “Carrie.” There’s a scene in the locker room at school that works as a gender-swapped version of the shower scene in “Carrie.” In both scenes, the main characters’ adolescent anxiety over their still-forming sexuality turns into real horror. For Carrie, it was the shock of her first period becoming a nightmare of being mocked for her innocence. In Andrew’s case, his bully’s jokes about his presumed sexual orientation leads to Andrew being sexually assaulted when the bully takes it too far. Carrie got her revenge by slaughtering the entire prom. Andrew uses the power of Satan to give the bully female breasts. You don’t have to be Freud to believe there’s something going on there.

The climax of the movie takes place during the town’s annual Passion play, which Andrew subverts by causing the actor playing Jesus to become actually crucified and raising an army of zombies to assault the crowd. Julie and the old priest’s sister arrive to put an end to Andrew’s transformation into the Prince of Lies, but not before Andrew does the afore-mentioned flouncing around in his sheer black robes, which is when we get our exposure to the Devil’s Dong. Like I said before, it’s a gusty move, but this movie needed something to set it apart from its influences.

It might be the movie’s fearlessness about full frontal male nudity that’s made it somewhat obscure today, but if you’re not squeamish about that “Fear No Evil” can be a lot of fun, even if all you’re doing is asking questions about some of the stranger elements of the movie. What’s with the high school girl gang that wears matching satin jackets? Why do all the town’s teenagers dress up for the Passion play like they’re going to prom? How did this movie end up with a soundtrack that includes Talking Heads, The Ramones and Sex Pistols? All good questions, none of them answered.