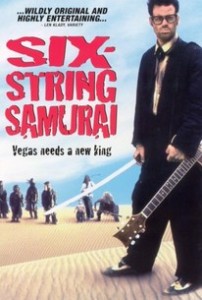 There are many different kinds of cult movies. There are those that are so specifically targeted at one particular sensibility that it’s nearly impossible for anyone but a handful to appreciate it, like “The Adventures of Buckaroo Banzai Across The Eighth Dimension.” There are others that aspire for profundity and inspire a few dedicated souls to unlock its meaning, like “Donnie Darko.” There are some that have been lost to time and require adherents to keep its memory alive the way monks used to memorize manuscripts, like “Nothing Lasts Forever.”

But the strangest and saddest category of these films is the “never-was” cult movie. Hundreds of productions fall under the radar every year, seen by few and remembered by fewer. There’s nothing remarkable about these, by definition. What’s more interesting are the ones that could have become obsessions but didn’t for whatever reason. “Six-String Samurai” is one of these.

On paper, it probably felt like a sure thing. It was 1998, right in the vortex of independent film’s post-Tarantino high point. “Pulp Fiction” combined cutesy kitsch and hard-boiled misanthropy to groundbreaking effect. Jackie Chan and John Woo had just brought Hong Kong-style action to a mainstream audience. Rock music wasn’t completely dead yet. It seemed like the perfect time for the story of a rockabilly ronin on a mission to tame a post-apocalyptic landscape. Somehow, it wasn’t.

The movie had a lot of momentum when it first came out, with a tie-in comic book by Deadpool creator Rob Liefeld and a few awards at the Slamdance festival. But although there was a lot of buzz surrounding it when it was first released, “Six-String Samurai” is virtually forgotten today. There are only a handful of reviews from the last several years on IMDB, Rotten Tomatoes, and Amazon. The last time it was released on DVD was 2004, apparently. Like a fertility idol found thousands of years later at a dig site, it’s a fetish without a following.

America was nuked into submission by the Soviets in 1957, leaving Las Vegas the last stronghold of freedom ruled by one Elvis Aaron Presley. But by the time the movie begins, Elvis has left the building. Buddy is a swordsman answering the call for a new King, along with a legion of wannabes. Played by stuntman Jeffrey Falcon, Buddy is the classic man of few words, choosing to let his katana do all the talking. He rescues a kid from bandits, and the kid tags along for the rest of the movie. Along the way to Vegas, they run afoul of cannibals, Communists, and a Grim Reaper who looks like he’s in Guns N’ Roses.

Over the course of the film, he develops a bond with the kid that never really develops beyond begrudging respect. It’s never revealed why Buddy wants to take Elvis’ place on the throne. The character is defined by his resemblance to Buddy Holly and his skill with a sword. There’s nothing else there. That’s nothing against Falcon, who does everything the script calls on him to do well enough. It all just feels too cool, like the entire movie is the dance scene at Jackrabbit Slim’s in “Pulp Fiction” without any of the context before or after it.

Some version of this should have found more success. After all, the “Fallout” video games have built a cottage industry around the cocktail of post-war camp and post-nuclear brutality. When Buddy leaves the kid in the care of a demented sitcom family who are clearly cannibals, when they’re chased by marauders in radiation suits, and when they encounter the remnants of the Red Army who have long run out of bullets, it’s as if they had made “Fallout: The Movie” at the same time the first game was released.

“Six-String Samurai” may have been a case of looking cool being more important than telling a story, but that’s never gotten in the way of a good cult movie before. Why this one failed to make much of a lasting impression when it seemed to have so much working in its favor is a mystery that may never be solved. It’s easy to see how it could become a big hit with anyone who likes any of its many elements. Every movie has its fans, but this should have more.

Here’s where “Six-String Samurai” charts on the Schlock Index:

Blood – A lot of slick sword fighting but very little in the way of gore or guts. As a stuntman with Hong Kong experience on his resume, Falcon doesn’t need a lot of slick editing to make him look like a real fighter. However, it’s clear he was leagues better than anyone else involved in the production. 3/5

Breasts – It’s a post-apocalyptic movie, so everyone’s filthy and looking miserable. Unless you have fantasies about refugee camps, there’s nothing here to excite you. 0/5

Beasts – The big baddie of the movie, Top Hat, is just Slash with his face obscured by shadow the whole time. Slash is a pretty gnarly looking dude, but only when you can see his face. This also is the rare post-nuke movie that’s mutant-free. There’s one little creep who kind of reminded me of when they brought the kid back from the dead in “Pet Semetary.” 1/5