There’s a new Hercules movie coming out this weekend, and it looks really bad. What’s worse, it looks like it’s going to be really bad in the same way a lot of bad fantasy/sci-fi movies are these days, where they take themselves so seriously that even the color has been washed out of the film. It’s a moody teenager’s conception of myth, where the heroes are constantly scowling and it’s always raining because being happy is lame and for lame babies. So surely, a movie that takes the opposite approach and goes wall-to-wall goofy with everything should be 100 percent better, right? Not really, and that’s why I’m talking about the 1983 Golan-Globus version of “Hercules” starring the only non-CGI Incredible Hulk.

“Hercules” is what happens when you try to make a movie without any faith in your own concept. Rather than taking a look at what has made Hercules one of the most enduring myths of the western world and the subject of dozens of movies already, the filmmakers looked at the box office receipts of the previous summers and asked, “How can we make this more like those?”

The movie steals from so many different sources that it’s almost a time capsule. If you only had 90 minutes to explain to someone what was popular in the early 1980s, you could just show them “Hercules” and say, “Like that, but much better.” The obvious influence is “Clash of the Titans,” but “Hercules” goes the extra mile by attempting to cram in as much from “Superman,” “Star Wars,” “Conan the Barbarian” and “Raiders of the Lost Ark” as it can.

The opening sequence of the movie recalls Richard Donner’s “Superman: The Movie,” but not in a good way. The lengthy scenes on Krypton established an epic sci-fi tone for “Superman,” elevating the material from mere comic-book pulp to mythic status through Marlon Brando’s stoic performance and Mario Puzo’s straight-faced screenwriting. “Hercules” tries to top that by starting all the way back at the beginning of time and the creation of the solar system, but the problem is that none of that has anything to do with the star of the movie and feels like padding. Honestly, if you’ve already shown us how “the planets” were created, you don’t need to devote 30 seconds to show us each one being born. It’s not a good sign when the movie starts killing time before the hero is introduced, even worse when it’s already 10 percent finished at that point.

“Clash of the Titans” gets referenced next, as a trio of gods watches over Earth and they fret about the balance between Good and Evil. Zeus can’t give Good too much of an advantage, so he decides to grant some godly power to just one man. Although in the actual mythology Hercules is the literal son of Zeus, in the movie Zeus just beams a twinkly light into an infant prince on Earth. Zeus picks a good time to do so, too, because within moments a bloody coup overthrows the kingdom and baby Hercules is sent down the river like Moses by one of his nannies. Herc is rescued by a couple of farmers (there’s “Superman” again) and he grows up into the star of TV’s “The Incredible Hulk,” Lou Ferrigno.

Herc is a nice guy who’s content to use his superhuman strength doing chores around the family homestead, but it’s not long before a wandering bear kills his father. Herc bludgeons the bear to death as his fists make little “pew pew” laser gun noises for some reason, and then he hurls the bear into space where it becomes the constellation Ursa Major. The bear was sent by Zeus’ wife Hera, who wants Hercules to fail and the balance between Good and Evil to remain…unbalanced. If I’m remembering my mythology correctly, Hera hated Hercules because he was one of Zeus’ bastard children, but here she just wants Evil to win because she’s not very nice. At this point I think it’s easier to just point out the things about Greek mythology that “Hercules” gets right, and I’ll be sure to do that when it’s appropriate.

The evil bastard who killed Herc’s real parents and usurped their kingdom is Minos, who now appears to be working for Hera but also wants to use science to rule the world. “I don’t believe in the gods,” he tells Daedelus, the God of Science, “but doing them a little favor can’t hurt, can it?” Daedelus tells Minos that he’ll have to choose between the gods and science one day, which is an odd position for the God of Science to have. Either way, she’ll be out of a job.

Daedelus agrees to help Minos kill Hercules, and creates a giant robot bumblebee that she sends after Herc. It’s here that the “Star Wars” influence is the strongest, because the robot bumblebee looks like a wind-up toy that has had a pile of model car parts glued to it in a haphazard manner. The spaceships and robots of “Star Wars” rejected sleek and shiny designs to present a more utilitarian, lived-in version of outer space. They looked like real, grimy, ugly machines, but the aesthetic doesn’t make a lick of sense when the robots are supposed to be created out of nothing by a god. Herc defeats the robo-bee, but not before his adoptive mother is killed. 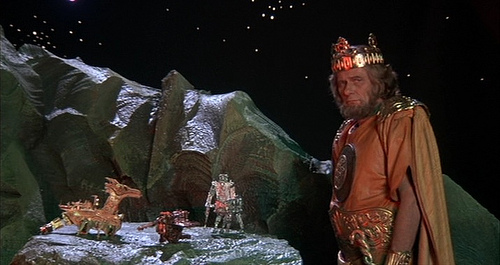 With his parents dead, Herc sets off to seek his fortune. In the court of King Augias, he wins a tournament reminiscent of the pit fighting scenes in “Conan the Barbarian” except for the fact that everyone’s swords make little “pew pew” laser gun noises, like Herc’s fists. The king is impressed by Herc, but the king’s mincing advisor suggests giving Herc one additional test – cleaning out the massive stables. Here’s something that hews close to the original myths, as Hercules dams the river and flushes decades of horse poop right out the back door, so to speak. Herc meets the king’s daughter, Cassiopea. She’s the most beautiful woman in the realm, but she can’t show her face to anyone except the man she will marry. Wouldn’t you know, though, that she’s so taken with Herc that she breaks her vow and removes her face to him right there in the middle of the horse poop. All this after they exchange only a few words, but then again if Cassiopea didn’t fall in love with Herc and vice versa, the plot wouldn’t really go anywhere else after that.

And boy, does the plot go places after that. Cassiopea is abducted by the evil Ariadne, played by b-movie queen Sybil Danning. Ariadne works for her father Minos, who works for Hera, who must have serious liability issues with all the outsourcing. Herc is thrown overboard and washes up on an island where he’s pressed into service by the sorceress Circe. Circe needs Herc’s help retrieving her magic thingamajig from a temple, and Hercules fights Daedelus’ three-headed robot dragon for it. They go into Hell, Herc endures a magic security system, he gets the amulet or whatever but they still need a magic chariot from the king of Africa to get to Atlantis by way of outer space. To get the chariot, Hercules has to grow to Godzilla size, separate the continents with his mighty strength, then he ties a big rock to the chariot and flings the whole damn thing into space so they can swing back around and land on Atlantis.

Meanwhile, Minos is planning to sacrifice Cassiopea to the gods for more power or something. He has a magic sword that contains the essence of the Phoenix that is supposed to give him ultimate power but is never mentioned until there are ten minutes left in the movie. Hercules gets the sword, fights Minos, sinks Atlantis and rescues Cassiopea. According to Herc, the Phoenix is “free to serve the universe.” I think that’s supposed to be a good thing. Herc asks Cassiopea if she’s the real deal or another one of Circe’s illusions. She replies that she’s “all of them and none of them.” That’s good enough for Herc.

If it sounds like I’m just zipping through these plot developments, rest assured that I’m not being any hastier with them than the movie is. “Hercules” tries to be a grand, sweeping sci-fi epic in its first 10 minutes then spends the rest of its time apologizing for boring you by hurling stuff at you as fast as it can. If it hadn’t wasted so much time explaining how the entire universe wasn’t created, maybe it could have devoted a little more time to explaining why Minos said he loved science but never used it, or why Hera wanted Hercules dead. Heck, even a minute or two spent developing Herc and Cassiopea’s relationship beyond the goo-goo eyes phase would have been nice.

Without written language to keep them alive, myths were retold over and over again, picking up new details and embellishments with each storyteller. “Hercules” is put together the same way, rolling through the pop culture of the early 80s and mashing bits and pieces of those stories into the original. But although the legend of Hercules has survived long enough to transcend cultures, it’s doubtful anything from this version of the tale will make the journey to the next storyteller’s version.