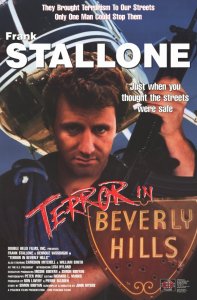 You know what you’re in for very early on with “Terror in Beverly Hills.” Not only does the name “Frank Stallone” appear almost immediately on screen, but the rest of the credits unspool while Palestinian terrorist mastermind Abdul runs his daily errands. He reads a newspaper, he goes to a shop, and he visits his local mosque. No dialogue, no action, just a man going about his business at a leisurely pace. When he finally boards a jet for the United States, you wonder if you’re going to watch him sit through the entire 14-hour flight. END_OF_DOCUMENT_TOKEN_TO_BE_REPLACED 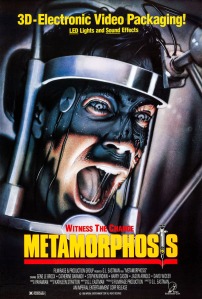 “Metamorphosis” is an Italian-made variation on the classic mad scientist tale of a brilliant man cursed by his own hubris to turn himself into a Halloween costume. Seemingly made with ample inspiration taken from David Cronenberg’s remake of “The Fly,” “Metamorphosis” ratchets up the mindless violence but tones down the tragedy. Unlike Jeff Goldblum’s doomed Seth Brundle, the main character of “Metamorphosis” only succeeds in making himself as physically ugly as he is spiritually. END_OF_DOCUMENT_TOKEN_TO_BE_REPLACED 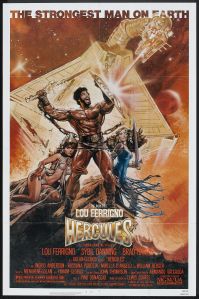 There’s a new Hercules movie coming out this weekend, and it looks really bad. What’s worse, it looks like it’s going to be really bad in the same way a lot of bad fantasy/sci-fi movies are these days, where they take themselves so seriously that even the color has been washed out of the film. It’s a moody teenager’s conception of myth, where the heroes are constantly scowling and it’s always raining because being happy is lame and for lame babies. So surely, a movie that takes the opposite approach and goes wall-to-wall goofy with everything should be 100 percent better, right? Not really, and that’s why I’m talking about the 1983 Golan-Globus version of “Hercules” starring the only non-CGI Incredible Hulk.

“Hercules” is what happens when you try to make a movie without any faith in your own concept. Rather than taking a look at what has made Hercules one of the most enduring myths of the western world and the subject of dozens of movies already, the filmmakers looked at the box office receipts of the previous summers and asked, “How can we make this more like those?” END_OF_DOCUMENT_TOKEN_TO_BE_REPLACED