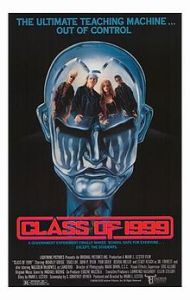 The first thing you see in “Class of 1999” is a computer screen spelling out the dire state of American urban public schools in the not-too-distant future of 1999. The next thing you see is Stacy Keach’s snow-white mullet, which looks like someone bleached a Davy Crockett coonskin cap. All we needed to see to know the movie takes place in a bleak dystopian future was Keach’s hair, so that’s one storytelling misstep right off the bat.

“Class of 1999” takes place in a very 1980s kind of future, one where corporate raiders plot to take over every aspect of American life while wearing kimonos and bandana-wearing teenagers mow each other down in the streets with military-grade firearms. You see, teen gangs have become such a problem by the mid-90s of the movie that they have seized control of most urban high schools and their surrounding neighborhoods. The police, we’re told, have given up on these areas and declared them “free-fire zones.” In response, the federal government has created the Department of Educational Defense and introduced martial law in the schools. 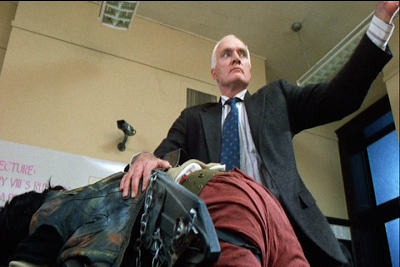 If I was the type of movie blogger who spent all his time looking for plot holes and ranting about “immersion,” I probably wouldn’t have spent much more time with “Class of 1999.” That’s because the movie’s entire premise requires the violent and lawless gang members who have conquered the inner city to continue showing up for school each day alongside the innocent kids who should know better than to get on the bus every morning. Why are these anarchists still showing up for homeroom?

You might think this kind of dreary future would be ripe for a sleazy corporation to come in and take control of a public service, “RoboCop” style. You’d be right, but instead of going the more logical route of building private for-profit schools to take the place of the ruined public high schools, Keach’s Dr. Forrest thinks outside the box and repurposes military robots into teachers who can bring order back to the classroom. This works for exactly one hour before the robots – including Pam Grier as a robot chemistry teacher – lose control of their programming and begin murdering as many problem students as they can. 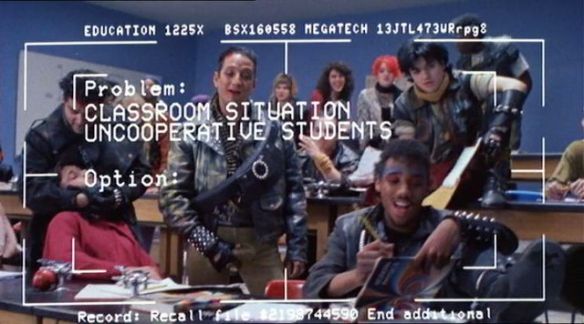 All of this happens to coincide with the return of Cody Culp, a higher-up in Kennedy High’s Blackhearts gang. The Blackhearts look like they’re either extras in a Sega Genesis commercial or they’re on their way to give Alex P. Keaton a hard time after his car breaks down on the wrong side of the tracks. Cody’s little brother Angel (played by the little vampire kid from “Near Dark”) is about to be initiated into the Blackhearts but winds up being collateral damage in the ongoing turf war between the Blackhearts and another gang. There’s also some talk of a new super-drug called Edge that has taken hold of the school in Cody’s absence, but that gets forgotten about rather quickly.

Cody is already having a difficult time getting back into the thug life, especially after he starts flirting with Christine, the innocent daughter of Kennedy High’s principal. (The principal, by the way, is played by Malcolm McDowell, who probably wished he could have excused himself from this school by pretending he had a pain in his gulliver.) Cody’s ambivalence about going back to being a teenage ne’er-do-well is interrupted when he witnesses all three robot teachers dish out severe beatings to his classmates in the same morning. Cody is a leader of a violent army of sociopathic, nihilistic teenagers who spend all of their waking hours trying to murder each other over territory and drugs, so needless to say none of this sits well with him. 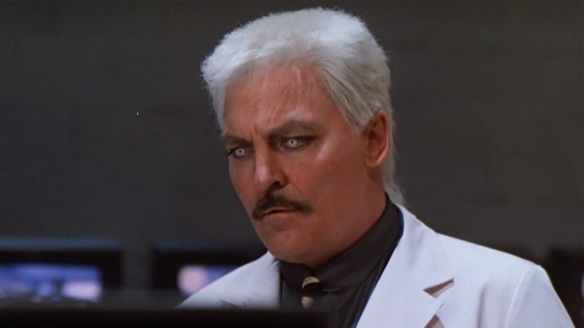 Armed with newfound respect for human life and school spirit, Cody convinces Christine that her dad and the three new teachers might be up to no good and they start investigating. Meanwhile, the robot teachers go full-on Terminator right away and start provoking the two gangs into an outright war.

It’s funny that one of the biggest problems I had with “Class of 1999” is that the movie sets up the Terminators-as-teachers hook and then wants to throw it out as fast as it can. There is almost nothing done with the idea of murderous robots posing as high school teachers before they drop all pretense and start killing indiscriminately. We see each one of them teach a class, encounter an unruly student, beat the ever-living hell out of them, and then they’re done pretending to be teachers. As soon as that happens, “Class of 1999” becomes another “Terminator” clone.

The movie’s rush to get its robot killers out of the classroom might have something to do with the fact that it’s kind of a sequel to 1982’s “Class of 1984,” also directed and written by Mark Lester. That movie also featured an urban high school ruled with an iron fist by teenage gangs, but without any of the science fiction elements. I can understand why Lester might not have wanted to repeat himself by setting so much action in the school, but it’s a wasted opportunity because there’s evidence that a more tongue-in-cheek movie closer in tone to “RoboCop” was lying just beneath the surface. Part of Cody and Christine’s investigation into their strange new teachers involves breaking into their apartment – where they find the kitchen cupboards stocked entirely with WD-40. 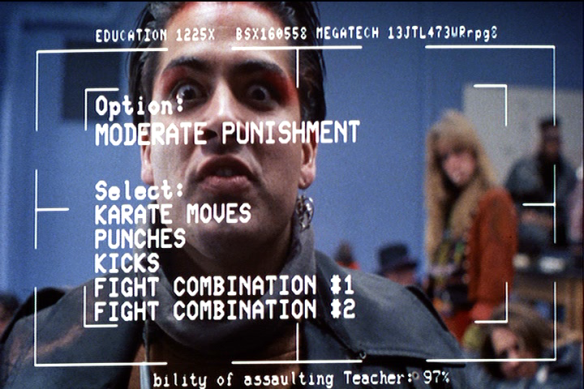 Just when you think “Class of 1999” is going to waste its entire runtime, however, the killer robots’ plot sets off a massive chase and fight between them and the teen gangs in the halls of the school. Teens are torn in half, flamethrowers are employed, and Pam Grier is forced to walk around in a painful-looking full-torso prosthetic that exposes her breasts and the inner cyborg works underneath them. There isn’t much to distinguish it from other Terminator rip-offs, but there’s enough action and explosions to keep it from being terminally boring. 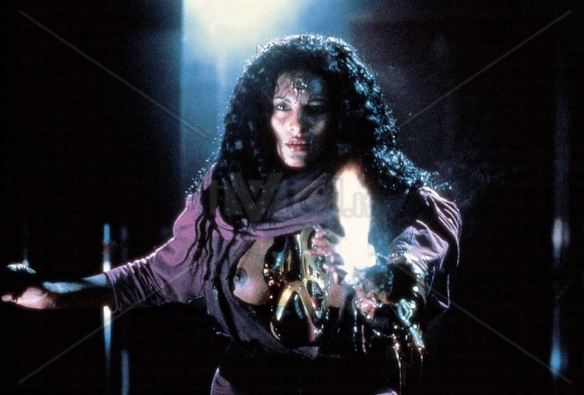 In the end, what ends up hurting “Class of 1999” the most is that it doesn’t have enough fun with its concept. There are times that the script seems ready to slide into a satire of troubled-teen clichés or sci-fi dystopias, but it never wants to fully commit one way or another. The movie is split between a grotesque sci-fi romp and an earnest warning about those darn kids today with their punk music and cheap drugs. It’s hard to take a movie with Stacy Keach’s bleached rat tail seriously, and “Class of 1999” should have known better than to try.