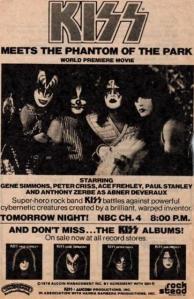 I don’t mean it as an insult when I say that KISS is the ultimate triumph of style over substance. Musically, there isn’t much to distinguish them from Van Halen, Aerosmith, Boston, or any other arena-rock staple of the late 70s, but none of those other bands have had their own action figures or lunchboxes or credit cards. KISS combined the blunt, dick-swinging machismo of their music with a fire-breathing stage show and a look straight out of a Halloween party, creating something 13-year-old boys of any age could love. Their style elevated them from a rock band into comic-book characters. In other words, it’s hard to imagine another band that could have inspired the 1978 TV movie “KISS Meets the Phantom of the Park.” Who else but KISS would even attempt to make something that aspired to be “A Hard Day’s Night” crossed with “Star Wars?” Who else but KISS could survive its reputation as one of the worst movies ever made?

“KISS Meets the Phantom of the Park” one-ups “A Hard Day’s Night” by presenting its heroes as not only the biggest rock stars in the world, but also cosmic superheroes powered by mystic talismans. As the movie opens, KISS is getting ready to perform a series of concerts at a California amusement park. The park’s rides and animatronic characters are all designed and built by Abner Devereaux, an eccentric genius who has an unfortunate tendency to make the rides too fast and the robots too aggressive. After one of Devereaux’s rides endangers some kids, the owner of the park fires him and Devereaux swears revenge. He kidnaps a park employee named Sam and turns him into a zombie slave to help him build robot duplicates of KISS to destroy the park.

Sam’s girlfriend Melissa becomes suspicious when Sam disappears, and naturally she turns to KISS for help. The band has an interest in solving the mystery because Devereaux’s Gene Simmons robot has trashed a portion of the park already. Devereaux discovers the band’s talismans and blocks their power, making it possible for him to capture KISS and replace them onstage with his robots. The evil robot KISS plays a song meant to incite a riot, but the real KISS breaks free just in time to fight their evil doubles and finish the concert. Somehow, Devereaux falls into a catatonic state and KISS frees Sam and everyone lives happily ever after, except for Ace Frehley and Peter Criss who were dumped from the band shortly after the movie premiered.

KISS became a phenomenon in large part because of their outsized personas, which was defined by their makeup, costumes and bombastic stage shows. Although all of those things work on stage, they work against KISS in the context of a narrative movie because movies require characters, not personas. The Beatles made “A Hard Day’s Night” enjoyable despite its flimsy story because their personalities were so engaging. By contrast, the members of KISS hardly get any opportunity to act like anything other than cartoon characters. Part of that is due to the script giving them some incredibly lame Saturday-morning-cartoon-style dialogue, and this is as good a time as any to mention that this movie was produced by “Scooby Doo” creators Hanna-Barbera. 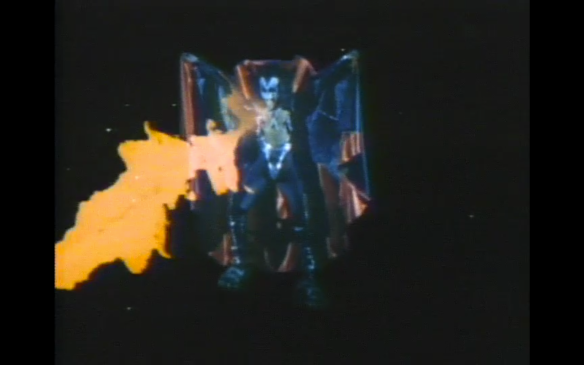 The only thing that could make what KISS has to say in this movie worse is how they say it, and the band attacks their lines like they’re reading them for the first time. Gene Simmons is the only one of the group who gives what could be called a suitable performance, and it’s no surprise that he’s the one member of the band who went on to have a second career as a B-movie actor. Paul Stanley tries his best, but Frehley looks like he’s always just about to make the jerk-off motion with his hand after every line and Criss allegedly had to have all of his lines dubbed over by the guy who was one of the Wonder Twins on “Super Friends.” 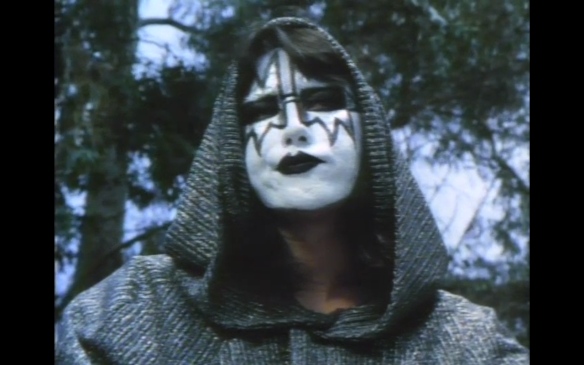 Without strong characterization to make KISS into people an audience could become attached to, “KISS Meets the Phantom of the Park” depends on the band’s superpowers to make them interesting. This turns out to be a huge miscalculation, as the movie’s cheap effects put it well below “Galactica 1980,” let alone “Star Wars.” Simmons’ flame breath is noticeably cut off in one shot, and hand-drawn “laser” beams make up most of the rest of the effects work. The cheapness also undercuts any attempt at making KISS seem like cosmic beings – the movie’s idea of making the band look mysterious and sagely involves glittery monk robes and having them sit on lifeguard chairs.

Of course, being superheroes means KISS has to get involved in some honest-to-goodness superhero fights over the course of “KISS Meets the Phantom of the Park.” It’s in these fight scenes that the movie’s amusement park setting becomes most appropriate because they look like dress rehearsals for the type of stunt show you only see because the line for the log flume is too long. There are slow-motion jump kicks, stuntmen being judo-flipped, and a lot of sword fighting where everyone’s afraid they’ll get cut. 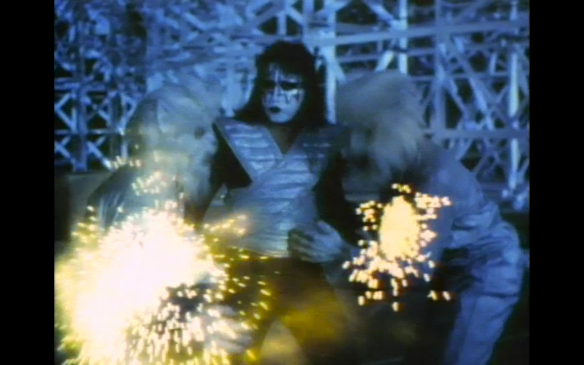 If “KISS Meets the Phantom of the Park” has any value at all beyond kitsch, it’s as a document of the band live on stage in its heyday. Since the band’s revival in the late 90s, it’s been easier to find recordings of KISS in concert with all of their accompanying theatrics, but that’s KISS 20 years past their prime. This movie is no “Gimme Shelter,” but at least you get an idea of why KISS ruled the Earth in 1978, and it had nothing to do with magic talismans or Gene Simmons’ kung-fu skills. 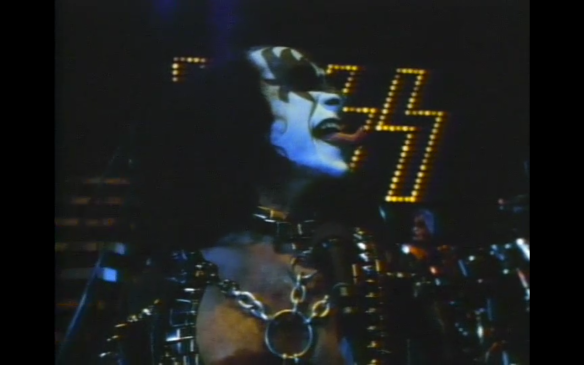 To me, one of the most interesting segments of “The Decline of Western Civilization Part II: The Metal Years” was Gene Simmons holding court in a lingerie store. It wasn’t because what he was saying was interesting, but because it was clear that everything about the segment had been tightly orchestrated by Simmons. It’s no wonder that Simmons studied under stage magicians before becoming a rock star, because magicians are all about controlling what you see. It doesn’t matter if you don’t believe in the trick, because the magician acts like he does and never gives you evidence to the contrary. In that way, KISS has been a magic trick that has lasted 40-plus years. Because the movie tries to make the band something they’re not, “KISS Meets the Phantom of the Park” is the rare instance where the trick fails and the strings are visible at last.