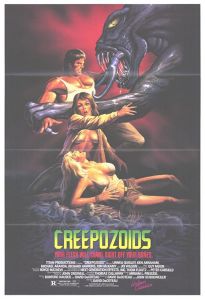 The first line of spoken dialogue in “Creepozoids,” said within the first two minutes of the movie, is this: “Is somebody out there?” Within two minutes of that, a giant cockroach bursts into the room. That’s efficient. I appreciate a movie that doesn’t waste time like that. I’ve seen way too many monster movies that labor under the delusion that people watch them for real human drama and character work. “Creepozoids” was made by David DeCoteau, a protégé of Roger Corman and Charles Band, the latter being the mind behind series such as “Puppet Master,” “Gingerdead Man,” and “Evil Bong.” DeCoteau is also a veteran of the porn industry, so as a filmmaker he’s experienced at cutting to the chase. END_OF_DOCUMENT_TOKEN_TO_BE_REPLACED