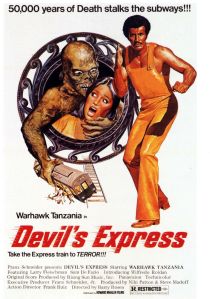 “Ninja III: The Domination” is the last entry in a very loose trilogy of ninja movies released by Cannon Films, the others being “Enter the Ninja” and “Revenge of the Ninja.” The first two movies definitely believe ninjas had superhuman physical abilities, but “Ninja III” makes the leap into the supernatural by giving them more magic mumbo-jumbo than vampires. According to this movie, a ninja can crush a golf ball with one hand, punch through the roof of a police car, slice a billiard ball in half in midair, survive more gunshot wounds than 50 Cent, and even transfer their souls into other people. It’s that last bit that makes up most of the problem for the heroine of this movie, Christie, but she also has other issues that we’ll get to. END_OF_DOCUMENT_TOKEN_TO_BE_REPLACED